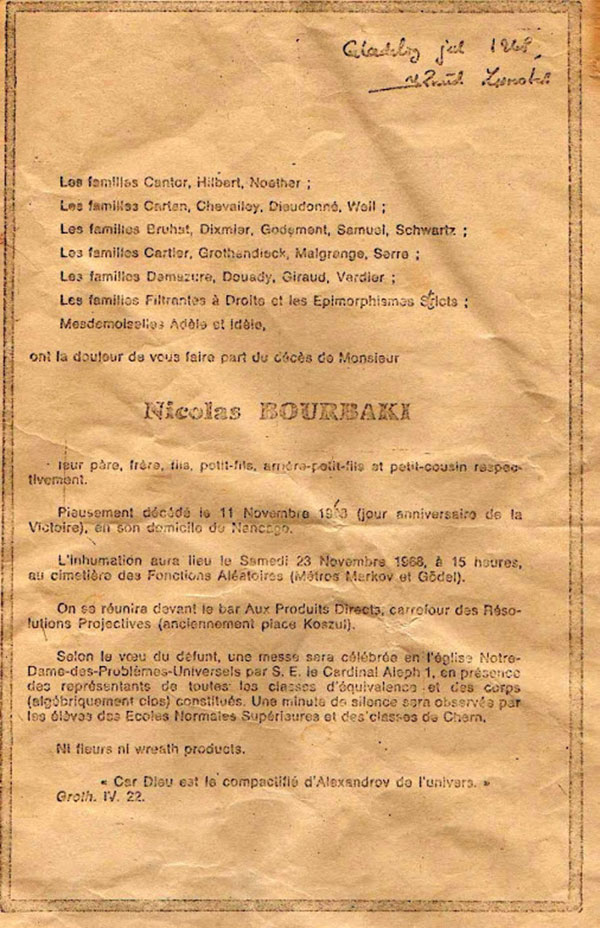 In according to Groth. IV. 22 the neverending author (who returned to blogging, hurray!) analyses the announcement of Nicolas Bourbaki's death on November 11, 1968. He did such an analysis before for Nicolas Bourbaki's wedding, which makes for a very interesting read. You should first go read his blogpost before you continue.

In his analysis he writes

However, Pieter Belmans objected that it was planned from the outset for EGA4 to consist of 21 chapters, and no more.

My memory failed me and I couldn't remember that I ever discussed the structure of the EGA's with the neverending author, let alone that I knew that EGA IV was to consist of a specific number of chapters. So I did a little digging, to check the veracity of the statement that EGA IV was never meant to have 22 chapters, and to understand what happened with the last chapters of EGA IV.

The plan for EGA IV

A published outline for what would become EGA IV can be found in the introduction to EGA IV1, if you ignore the large number of preliminary chapters and go to page 221 of the pdf. EGA IV was to contain 21 chapters (but they say in a footnote that the information for §11–21 was only an indication, not a promise), and they stuck to their plan, except that the last two chapters were given a different title. Originally in 1964 they were planned to be

A possible EGA IV.22 (and further)

At this point the plan was

So at some point there would have been a chapter 22 (and much more)! Grothendieck advocated stopping at §27 because $27=3^3$ is a pretty number.

There is no mention of the chapters 20 and 21 as they appear in the published version, and the two chapters that did get published are not mentioned in this outline. Apparently, EGA IV4 was very much in flux.

What happened to these planned chapters?

Also interesting is the handwritten page directly behind the letter in the facsimile, which lists (if I interpret the handwriting correctly)

There is Brauer–Severi schemes in there!

According to the last plan for the entire EGA, given in the introduction of the Springer version of EGA I from 1970, the title for EGA V would have been

In the original plan from 10 years earlier, it would have been

The table of contents suggests that it is an amalgam of various proposed chapters, and the first page actually claims that this would have been EGA IV.20 (and this numbering persists), as was the original plan from 1964 (or whenever the final draft of EGA IV1 was finished. So after writing a draft of §IV.20, they decided to replace it by a chapter on memorphic functions.

Later, according to another version of the translated and edited prénotes, it was that this would have to become §EGA V.5.

So given that Jacques Roubaud wrote the announcement at the end of 1968, it seems safe to assume that no further chapters would be added to EGA IV and that this was known. The question is whether it was already clear that no further EGA's would be produced?

And out of curiosity, is there a proposed table of contents for EGA V? There is such a claim on the nLab actually.